March 30, 2021
It's been a while since I've posted anything here, so where do I begin with all the updates? Maiden Voyage We lost Bill last year. We lost John as well. Bill was our Adrian and he passed away after a couple of years of health battles. John, who played the Steve role, was transferred for work to Colorado. The result is we had to find new guitar and bass players and get them up to speed. I think we're ready for gigs again. I'm still playing the Dave parts and trying to hold it all together as the other guys learn the songs we had down previously. Praise Band Not a whole lot new there. Singers come and go, but that's just the nature of being in a volunteer worship leadership position. I think we've made some great gains when it comes to singing recently, though. Still playing 4 strings and having fun with it. Pop Band The pop band I was in is currently on pause. Our drummer, Dan, was lost in an auto accident recently, and rehearsal space was expensive, so we'r
Post a Comment
Read more

August 30, 2018
It's been a while since I posted, so I thought it was time for an update. Maiden Voyage is starting to get busy. This summer saw quite a few shows and several benefits with us performing. We had our first show with us providing sound, which meant I had to buy a trailer. That was going to become necessary anyway just to continue moving our light show around, so it just worked out well. We played in Lincoln for the first time. Nothing earth shattering about playing another town about 60 miles from where we're based, but after that one show we immediately booked 2 more in Lincoln with minimal effort. Guess that first show is the most important one like they say... only one chance for that first impression. Speaking of 2 more shows with minimal effort, that's how most of our shows are happening now. We're not even looking for shows all that hard and are starting to have booking agencies and show promoters contacting us about being a headliner for some bands they'r
2 comments
Read more

June 30, 2017
July is panning out to be a busy month playing. We're playing Omaha on 7/7, Maiden plays Lincoln on 7/9, we're playing Des Moines on 7/15, and we just added Kansas City on 7/29. That's three shows across three states in one month, and then we're supposed to head to Rapid City during bike week. That brings us to the next one, though... the venue may have fallen through. The host of the show is now scrambling to find a new location to set up his stage and food trucks for that show. I should know soon if it's actually happening or not, but we're really hoping to have 4 states in under a month. Either way, it was very nice to be asked. What other states can we add yet this summer? I'm sure there are a few. We got asked to play in Colorado, but we're still waiting on details for that. Kansas wouldn't be too bad of a drive. Anyone have suggestions for us?
Post a Comment
Read more 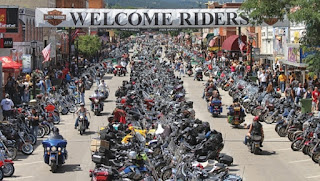 Well, here it is. Our first BIG show announcement. We've been asked, less than 6 months after our first show, to play Monsters of Madness Tribute Fest in Rapid City during the Sturgis bike rally. While it's not in "Sturgis proper", this might actually be to our benefit as we'll be right next to Rapid City Harley Davidson, which gets a huge number of visitors every day and we'll be on an outdoor stage, so people can hear us without entering an establishment. We'll be playing Aug 4 at 4:30, 6th at 10:00 and the 7th at 6:30. There are some big names that we'll be sharing the stage with, but more on that later. For now, we're playing and need to start figuring out logistics.
Post a Comment
Read more 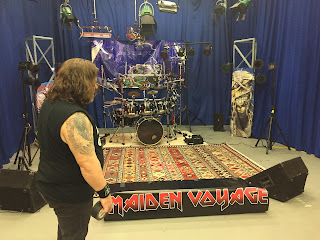 I didn't get anything posted last month. Consider this an apology to everyone who reads this regularly. But, I think there was good reason. Things are really picking up for the Maiden tribute band. I've taken over booking duties, and so far it's going well. We have a show coming up later this month, I'm working on closing the deal on a 2 night Maiden Weekend party leading up to their show on July 9th, we're playing a B.A.C.A. benefit in Des Moines the following weekend, and we've been asked to play something else that I'm working on a contract for. I can't spill the beans on that one yet, but let's just say Trump would be proud, because it'll be "YUUUGE!" Also of note is that we have done a video shoot for a promo. Between the audio and video, it was almost 10 hours in studios. Once it's released (should be early next month), I'll be sure to post it here. Until then, here's a peek at our video set. So, on that note
Post a Comment
Read more

It's funny how the dance floor doesn't really fill in for Iron Maiden even though we had 150+ people in the audience. I guess it's just not dance material. Anyway, here's some performance video to give you a taste of the Voyage from our first public performance. This was before gear upgrades (Adrian Smith signature guitar for Bill, my JMP-1 and Marshall power amp, etc.)
Post a Comment
Read more 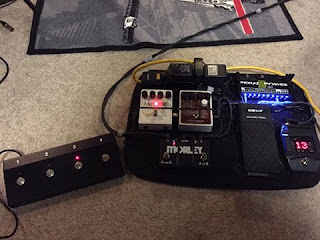 Since I'm pretty much sticking to the Iron Maiden tribute band, I've been able to knock down the number of pedals I require. So... for starters... I got rid of a lot of the bulk. No need for a second volume pedal, reverb, delay, etc. Very simple signal path... wireless into volume into A/B/Y which either goes to the EHX pedals for some synth sounds or on to the... Marshall JMP-1. That's right, I found a vintage piece of gear with tubes in it which is the same model as Maiden themselves use. Sort of takes the guesswork out of getting the right tone when their settings are well documented online. Both of the signal paths go to a side of my Marshall 8008, with an old school Digitech DSP 128+ adding a bit of verb and delay to the guitar side of things. The only other thing I have been using is a power conditioner and I'm probably going to add my Noise Clamp back in the loop at some point, but hide it in the rack. Otherwise, it's pretty straight forward and m
Post a Comment
Read more
More posts